Our very own Higglytown Hero

We were sitting at dinner tonight (at a restaurant) when I noticed a gap in Evan's mouth where a loose tooth used to be. Looking closer, he had in fact lost his tooth, but had no idea when/where it happened. And then came the tears...after taking him outside and calming him down, he was just upset because he thought the Tooth Fairy wouldn't come unless he had the tooth. Poor kid! I explained these things happen and we would write a note to the Tooth Fairy and everything would be okay when--voila!!--Ethan came out with the tooth wrapped in a napkin. Apparently he found it in--eww--the cheeseburger Evan had been eating.

Hooray for another milestone in life!! 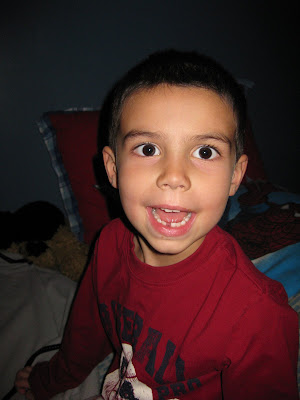