My "little" brother graduated from high school. I say "little" because...well...he's about a head taller than me. But I remember what he looked like when he really was little (especially because Evan looks soooo much like him), so I can still call him little. 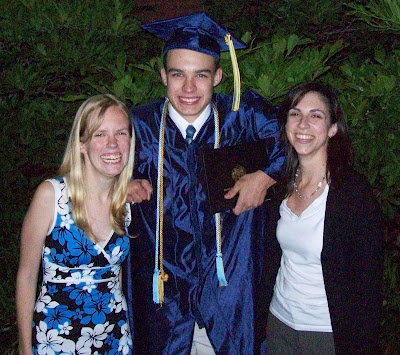 So the whole graduation ceremony was...hmmm...interesting.

As I was giving my father a hard time for not buying me Twizzlers at the concession stand (yes, graduation had a concession stand), I hear my first and middle name being yelled at me, something generally done by a parent when you are in trouble. Pretty darn close, it was my oldest (as in, have known the longest) friend's mother sitting 2 rows in front of us, attending her grandson's graduation (not my friend's kid, her older sister's kid). Very small world.

They let 2 seniors make speeches. The second was definitely better than the first, but #1 set the bar pretty low. I don't know how long her speech was, but by the end she had quoted/referenced Barack Obama, her minister, one of the Columbine shooting victims, the bible, and Dr. Seuss. And she went into a lengthy portion about how not all people get up in the morning saying "Good Morning, God!" and instead say "Oh God, it's morning?!?!" which was just odd. She smacked her mouth a lot, which was quite annoying, and also paused every 5 words or so. Near the end, when she paused, everyone would clap with the hopes that she would just stop talking (that's why I was clapping anyway).

Speaker #2 wasn't tooooo bad, but the basis of her story was to remember when you were in first grade and your teacher asked you to draw a picture of what you wanted to be when you grew up. This girl apparently drew a picture of herself graduating high school, which I don't think was a thought that crossed my mind in first grade. My biggest concern in first grade was how I got stuck taking gym class (I thought it was just my class--didn't realize EVERYONE had to take gym). But, during the speech, she also referred to first graders as being 10 and 8 years old. If memory serves, I was about 6 at the time, so maybe things have changed ;-)

The rest of graduation was pretty standard...lots and lots and lots of kids getting diplomas, ear piercing whistles/shrieks/screams when certain names are called by people acting/looking like they were at a basketball game instead of graduation. Beth and I picked our favorite names out of the program for future children to pass the time after Tom's name was called (if you name a girl 'Diamond', she will always be somebody's best friend, according to the lady in front of us who screamed that repeatedly when Diamond received her diploma). And that was all I can remember from graduation, although I know my sister will fill in any highlights that I missed, because I'm sure I missed something!!
Posted by Jessica at 7:56 PM