Another year, another ballgame

Every year around this time (Labor Day weekend), my mid-Atlantic family members go camping and incorporate a minor league baseball game into the weekend (remember last year?). This year's locale of choice was in PA, and we went to see the Bowie Baysox take on the Harrisburg Senators. They are the minor league teams for the Baltimore Orioles and Washington Nationals, so we had representation of all teams and everyone had a chance to cheer. Evan asked a million questions, but refused to direct any of them to his Uncle Tom who would have been more than happy to talk baseball to him the entire night, so I spent a considerable amount of time explaining strikeouts, foul balls, sacrifice fly, stolen bases, walks...whew. Both kids fell asleep in the car on the way home and by what can only be described as a miracle, remained asleep as Ethan and I carried them into the house and into their beds.

I hope the campers were able to get a better night's sleep on Saturday--sounded like Friday was a little rough. Some highlights from the game:

My aunt asking me to tell my uncle that the kids are thirsty and he needed to get a drink plan going. I translated that to mean my aunt needed a beer. A very large beer. I translated well.

A batter getting hit by a ball and therefore earning the right to go to first base. Someone asked why did the batter look annoyed--he got to base without even doing anything?

Evan sitting in his pizza. Sigh. We had many problems with the "sit down and eat" concept at the baseball game.

My brother was able to get a ball from one of the Baysox and gave it to Evan. Evan turned and gave it to his cousin Fiona because "she's wanted one her whole life so I really wanted to give it to her." How does such a big heart fit into such a tiny body?? 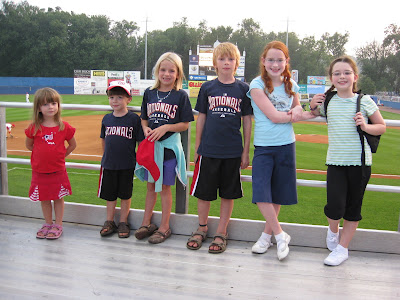 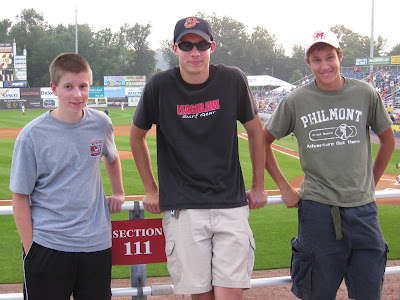 Eric & Margaret
(his buddy last night...
she even got the treasured high-five/pound/bonk farewell!) 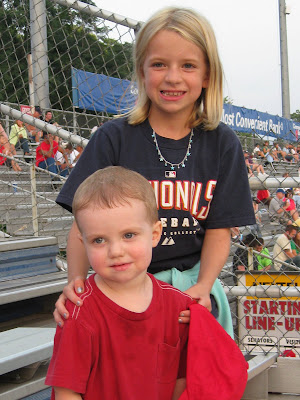 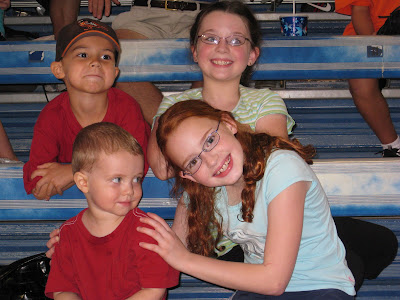 Ethan swears he only took out the iPhone to show it to my sister...
it's NOT because he was bored at the game ;-) 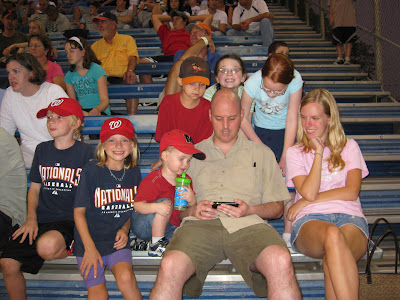