Just the way it goes some times

Ah, vacation...plenty of time to relax and watch soap operas and put my feet up and eat bon bons. Ha! Not! Okay, yesterday wasn't too stressful...dropped the boyz off at daycare, did a little shopping, and met a few friends for lunch. Came home and wrapped presents for what seems to be like the hundredth time and had just started to settle in for a blogging when daycare called to say Eric was sick and had a fever. Fantastic. So I go pick both kids up and we come home where Eric proceeds to demand Pedialyte and then promptly spew it back out. Right in front of the toy bins (splashing half the toys). And then again while sitting on my lap (I don't know how I escaped, but somehow I did). Luckily that was the end of it, but that was enough. Had to deal with more screaming while the rest of us ate dinner, but I think the ringing in my ears has finally stopped.

So this morning we head back to the doctor who very clearly said to come back if he wasn't feeling better by Friday, and camped outside the office for clinic hours. Clinic opens at 8; we were #3 in line at 7:40. Amazingly enough, same doctor is there (and having a much better day), so at least I didn't have to re-explain things too much. Bottom line is, even though he's on antibiotics, Eric has developed an ear infection in the OTHER ear. So we get some heavy duty drugs (let's hear it for the Z-pack!) and are on our way home.

Eric on the way to the doctor 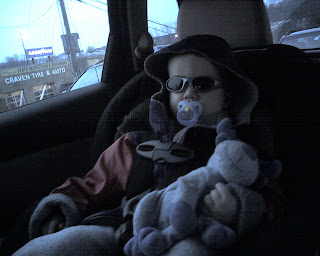 Ethan and Evan are headed to Hershey Park, so I think Eric and I are going to take a vacation afternoon/evening and watch some crap TV, order a pizza, and have a glass or two of our respective purple juices before the busy pre-Christmas weekend gets underway!
Posted by Jessica at 2:09 PM