I have to admit, I was afraid. Since his job allows him to work less or no hours on Fridays, my hubby has taken over dinner duty on Friday nights. It hasn't been easy. Not on me, having to relinquish control of something, and not on him, having to deal with my pickiness at what he's cooking and what he's using to cook it. I mean, the man can grill like nobody's business, so why is there a need to step into the kitchen--my domain--and cook there??

To make it even more frightening, he insists on cooking from these A Man, A Can cookbooks. Although, I have made some of these recipes myself and they're not so bad. I think I'm just still traumatized from the day Ethan made the boys chicken nugget refried bean burritos for dinner.

Anyway, tonight was 'Manly Jambalaya' night. It had chicken, sausage, shrimp, AND bacon in it. He didn't realize the recipe called for 'regular' rice and he was using instant. I forgot to buy green pepper. He used some sort of onion spice instead of one of the many onions sitting in the refrigerator.

It was pretty good. I'm pretty sure I have a clogged artery from all the greasy saltiness, but it still was good. Evan ate most of it after we convinced him the sausage was hot dogs and Eric held his own after he lost interest in putting his feet on the table (a firm voice when you're trying not to laugh just doesn't seem to do it, but the sight of his little red sock inching onto the table was just too funny to contain).

So if your hubby wants to cook manly jambalaya, give it a chance. Join in the moment and have a beer and good belch afterwards too ;-)

In the interest of being a stern parent, I was not able to take a picture of Eric sticking his foot on the table. So here's my hubby with his favorite cooking utensil. 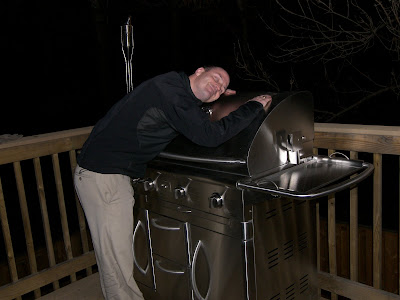