Evan woke up this morning coughing and telling me he doesn't want to go to daycare (the last time he said that, he had pneumonia). I'm not too worries about that right now; I think he just cold the caught I'm trying to get rid of. At least it's Saturday and a long weekend, so we'll just see how it goes. In the meantime, he's incredibly pitiful and somewhat whiny about it all, but I'm learning that's just how boys/men are when they're sick ;-) So he's set up with a movie in the living room and Eric is wandering around, creating his usual chaos. 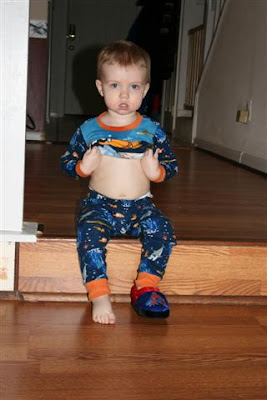