What am I going to do in February when I actually have to figure out what day I'm on so I can include it in my blog title?

Ethan had a joyful (?) day at home with the boys while I opted to bank my holiday for a later day and go to work. Wasn't too bad, only a handful of people were in, so a good day to catch up on a few things. And to do a little work. I have heard no complaints from Ethan, so I assume he has more patience than I do staying home with the kids after a full weekend ;-)

Had an awesome potato and goat cheese Spanish "tortilla" for dinner from my favorite cookbook, which sounds completely weird, but was, well, awesome. Kind of like a big omelet. Evan was in a hunger strike mood and ate about 2 bites, but once Eric got started, I had to stop him from licking the plate. The reward for such good eating? Toast. The boy loves toast. He loves to lick the jelly off of it and then hand it back for more and when we finally say no more jelly, he still doesn't complain. Seriously, I don't think I've ever seen a kid so happy with a slice of bread: 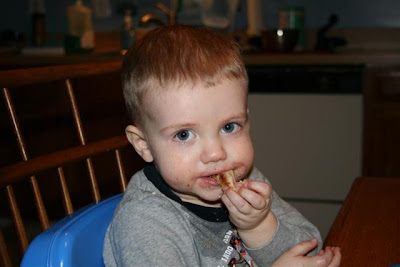 After dinner, Evan and I continued our card playing adventures and I showed him how to play "War." Much more successful than "Go Fish" because there's less arranging of the cards and it's just a matter of knowing which number is bigger than the other. Finally had to call the game on account of bedtime, but we saved the card stacks to continue tomorrow.
Posted by Jessica at 8:02 PM