I get a phone call from Evan's teacher today to let me know that he run into another child and will probably have a nice little bruise on his left cheek. Doesn't seem to bother him, he immediately went back to playing and they had to convince him to put some ice on it. No problem. I pick him up from daycare and see the bright red spot on his cheek, and also notice a matching spot just above his left eyebrow. Teacher informs me they were just about to call to let me know that, while on the racquetball court--they don't play racquetball, but the health club 'loans' them the space on cold/rainy days, which is awesome so they aren't all wound up when they get home from not running around all day. There I go, off topic again. Anyway, while on the racquetball court, Evan ran into a wall and that's how the spot above the eyebrow showed up. Probably won't be too bad tomorrow, because Evan tends to 'heal' pretty quickly, which is good because I swear he runs into a wall/child about 3 times a week. One day, you will see him on a home video walking smack into a street sign or something because he's looking a completely different direction than he's walking.

I have no pictures of Evan's bruise, but here is a rather odd picture of one of our dogs with a black eye (no idea how it happened, assuming his sister caught him in the face with her paw, because she tends to do that a lot). But it's the only time I think I've ever seen a dog with a black eye...he plays part of the pitiful male pretty well, don't you think? 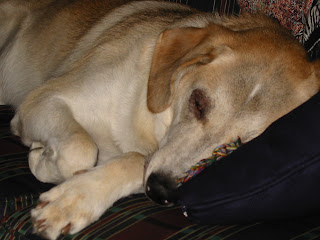 Cheap and somewhat inappropriate humor, depending on who you are: I had to change the picture I was originally going to post because it left the door wide open for pitiful male part jokes :-)
Posted by Jessica at 8:12 PM