I need to preface this by saying I have had a very tall drink (especially for a Monday night), but more on that in a minute.

What is up with the weather?? It was 70+ degrees today!! In January!! The boys had some great running around time when we got home this afternoon and actually listened to my request to stay on the sidewalk since the grass is a mudpit. Still, we have a good stretch of sidewalk that wraps around our row of townhouses, so they had a blast letting off several days of pent-up energy even though Eric refused a nap today (becoming a weekly occurrence).

Evan attempting to give Eric a hug 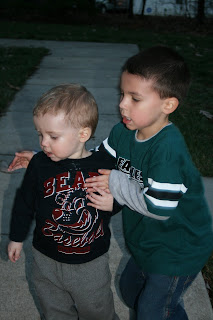 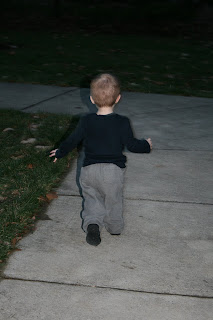 Evan being a sweetheart of a big brother and getting Eric some water to "help calm him down." I didn't even ask him to, he just thought it might help. 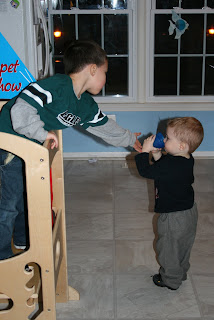 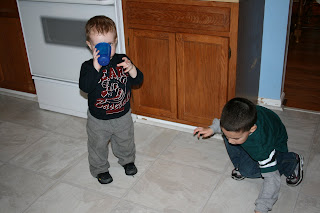 Had yet another successfully nutritious dinner from my favorite cookbook and Ethan took Eric off for an early bedtime while Evan and I went to the basement for some computer time, which is when all hell broke loose.

Evan was sitting at 'his' computer, coloring on his new computer program while I sat in a chair downloading the pictures I just posted. We have this cabinet system from Ikea that folds down into a desk and is secured into the wall with 2 huge screws (since it's very top-heavy). We keep a laptop, the wireless gear, and some misc. office supplies inside the cabinet, and our new, very awesome, wireless printer on the top. As I am sitting in my chair looking at pictures I hear a creak and see the cabinet start to lean forward and the printer slide toward my precious boy's head. By some miracle that only a parent in distress and Superman can have, I jumped across the room and pushed the cabinet/printer back up before it did who-knows-what to Evan (you can imagine the horrible scenarios running through my head if I had gone to the bathroom or something else that kept me away while this happened). Evan was the greatest listener ever and went upstairs and interrupted bedtime (which is usually the kiss of death) and told Ethan exactly what I said "Daddy, everything's okay, but Mommy needs some help" and Ethan pretty much slid down 2 flights of stairs to find my gray shaking self leaning against the cabinet. Here's where the tall drink comes in.

Long story short, everyone is fine, Evan received a popsicle for his excellent listening skills, and the cabinet is anchored into the wall with a shelf unit until we get what we need to secure it so that it's where I will take the children if an earthquake ever hits. But it's not over yet.

Apparently, Eric has inherited his father and brother's tendency to get night terrors when he's over-tired. Fantastic.

I think it's time to refill my tall glass.
Posted by Jessica at 8:04 PM